For as long as I can remember, the term “latino” did not include my face.

Not that I blame anyone. My own people packaged and sold a “Hispanic look” to the outside public and I just wasn’t a part of it.

While the “All-American” standard of beauty usually insinuated women of a lighter hue, Americans of color have found ways to break through. Vanessa Williams and Carole Gist challenged perceptions on the most basic of levels- beauty competitions-to be the first Black Miss America and Miss USA respectively, paving the way for others to follow. Ground was gained inch by painful inch as Americans of color continue to work to redefine what “American beauty” looks like. Sadly, for many of us Latinas of a darker hue, we remain invisible.

Turn on to Univision or any other Latin-based channel at any given time and try to find a Black face. If you do, she is likely a maid or a servant. Our magazines still lean towards a more Eurocentric “look”, our cross-over entertainers are mostly White and mysteriously most supermodels and beauty queens from countries largely known for their mixed ethnic cultures appear European (Giselle, anyone?). With our own people completely erasing the thought that Latinos of any value would look anything other than direct descendants of Spaniards it is no question why America chooses to believe and promote the same ideal.

Conversely, most Latinos in Hollywood who appear “too dark to type” choose to blend in and accept the parts that fit their ‘look’, and I don’t blame them. You should never have to carry the weight of an entire race or ethnicity on your shoulders wherever you go, especially if it means your job or livelihood. Gina Torres mused in Latina Magazine; “..there are so many of us out there. And part of it is, we’re undercover. They don’t know, and if we stood and said, ‘that’s it I’m not going do any roles that are not Latina,’ we would not work.”

That is until recently.

While many before her have alluded to their ethnicity, not since Daphne Rubin-Vega and Lauren Velez has a popular actor been so vocal about accepting the many shades of latinidad. 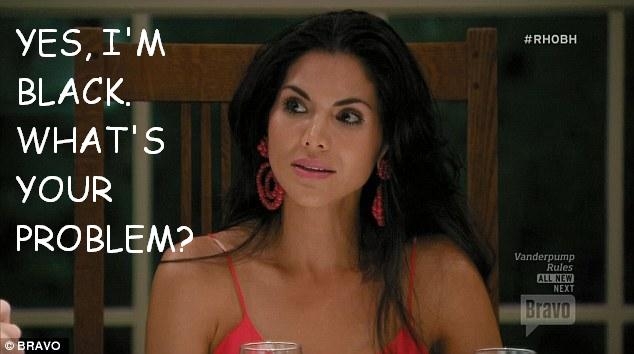 In a culture where there are only two shades, “normal” (mostly Sofia Vergara’s shade) and “dark” (anything from Eva Longoria’s olive tone on down- yes, EVA LONGORIA), tan, chocolate and mahogany Latinas are all but non-existent in the conversation. Since she began her acting career with Center Stage, Saldana has been vocal, outspoken and downright militant about being accepted as “Latina”, and representing it on film. I was not surprised at the backlash from the Latin media.

I was, however, quite shocked by the African American backlash.

“So, she’s confused? She looks like a sista to me.”

“She gonna pick a color now?”

“What could she possibly understand about being Black in America?”

I could not understand how they couldn’t see what we have in common. How we more than understand what it is like to not be considered “beautiful”…or not be considered at all. That we know all too well what being invisible feels like. How Zoe has more than enough to draw from to understand her role as Nina Simone. How standing up and declaring “I am Latina, I have the right to be acknowledged and represented as such and you will deal” meant the world to women who looked like me.

Maybe they just didn’t know that for every person who signed their name on that change.org petition to have someone else play Nina, at least 100 petitioned for someone who “actually ‘looks’ Colombian (read: White)” to play the part in Colombiana. Maybe they didn’t know how long it took for a Latin magazine outside of the US to feature her on the cover. Maybe they don’t know there are some covers she will never get on.

All I know is I’m proud of her. I know for every questionable sound bite about “not seeing color” and being “strong” there are equal gems in her interviews. I know because of her and others like her, I can point to a face on my TV that looks like me playing a strong, nuanced role and not a maid or a harlot. I know that the next time someone says, “how are you Hispanic?” I can say, “you know, like Zoe” and be understood.

Zoe is Black. And Latina. And so am I.

And you will deal.

6 thoughts on “Zoe Saldana is Black. And Latina. Deal.”

words & art from an optimist

A place to lay a thought

Celebrating Beauty of All Shades

an occasional blog about nothing...and everything.

now a word or two
The Writer's Block

Dropping Gems of Randomness Since 2010

Living your most healthy life.